Children can be cruel.  A boy or girl with protruding ears just starting out in school may soon find themselves to be the victim of humiliating “Dumbo” jokes or other similar teasing making socialization more difficult at this early age.  Many kids learn to wear their hair long to hide their discomfort.  Unfortunately, a child’s self-consciousness heightened by peer ridicule can make school a dreaded experience.

It is fortunate that the ear approaches it full size before these situations may occur.  This makes surgical correction of prominent ears a viable option before a child starts school.   The procedure may more accurately be characterized as a form of psychosocial surgery than cosmetic surgery for it can significantly change the early childhood experience.

It should first be said that surgery may be avoided in many childhood cases by taking early action in the first few days of life.  Studies have demonstrated successful improvement of ear contours with taping, splinting, and molding with treatment periods lasting six weeks.  Commercial molding systems are available.

Ear prominence may not always be apparent at birth sometimes occurring as the child grows older.  This situation may also be traumatic for many adults who have not had the opportunity for earlier intervention.

Surgical correction of prominent ears is referred to as otoplasty and is often more simply recognized as “ear pinning”.  Surgery is done on an outpatient basis and may be completed in a couple of hours.  In a young child, it is performed under a general anesthetic.  It can be performed under local anesthesia with sedation in the adult.  There are various techniques used depending on the patient’s anatomy and the surgeon’s preferences.  Generally, the cartilage is rolled back to create a natural fold to the ear (called a scaphal or antihelical fold) and the outer portion of the ear (the helix) is brought closer to the scalp.  Positioning of the ear is maintained by appropriate internal suturing of cartilage.  Correction of the earlobe may also be required.  It is not unusual to have asymmetry with one ear more prominent than the other and the procedure is modified accordingly.   I use dissolving sutures to close the skin so that no stitches have to be removed.  The scar is on the back of the ear and therefore not typically visible.  Care is taken not to “overdo” the re-positioning so that the ear does not appear glued down to the scalp (often called a “telephone deformity”).   “Don’t overdo” is a good guiding principle in all of plastic surgery.

After surgery, a dressing is kept on the ears for a few days and then can be switched to a headband extending around the top of the ears.  The idea is to prevent the newly shaped ears from accidentally being pulled forward during the healing process.  After a variable period, the headband may be worn at night for protection. 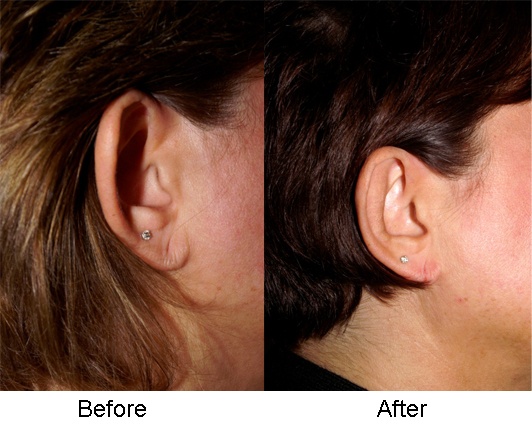 Result of correction of prominent ears performed by Dr. Wisnicki.  Surgery improves the position of the ear and recreates the natural folds on the outer surface of the ear.  Patient is a 48 year old woman. The associated concerns of ear deformities are not limited to children or either sex.